Okay, so everyone loves retrocomputing stuff.  Looking at a piece of equipment or an item and going “Gosh I remember using one of those ${back_in_some_day}.” Well, I finally decided to formalize my collection a bit, and set some goals for myself.

I’ve decided to focus on handheld computing devices that had a significant impact on the industry, or I have a special emotional connection with.  Handhelds in particularly are attractive because, well, I don’t have a lot of space.  So while I’m sorely tempted to collect Apple II’s, old CP/M machines, and DEC minicomputers, living in an 800sq ft townhouse makes that a practical impossibility.

So I’ve focused on handhelds.

It became quickly apparent that I’d need a place to store and display them.  My partner had a glass fronted wooden display case that was a good starting place.  It had a storage space underneath it for boxes and cables, and nice glass windows on the front.  I had some custom glass shelves made to replace the wooden interior shelving, and installed some LED lighting across the top.  With everything done, I was able to put all the things I had (so far!) into it, and it doesn’t look too bad! 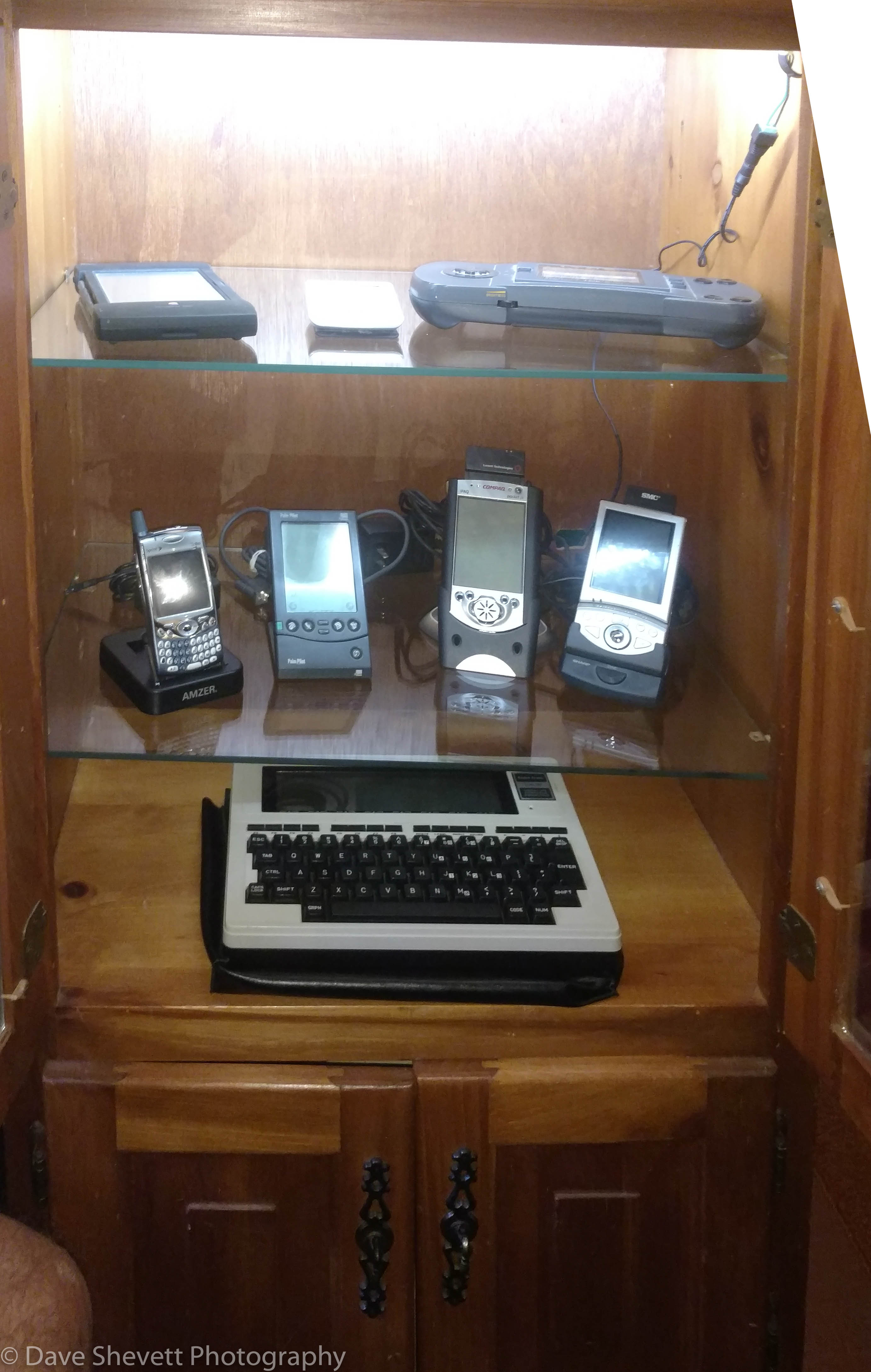 . (Here’s what it looks like with the doors closed.)

Many of these were items I already owned, but I’ve fleshed things out a bit with finds from eBay and other auction sites.  So far, here’s what I have.  All items work, and have functional batteries, except where noted.

I hope to expand the collection going forward.  Here’s my current wishlist:

If I do end up getting these things, I may need to expand my cabinet.  But right now, I’m pretty happy with what I’ve got.

Update: I now have a page specifically for the collection.

The last couple weeks has been pretty stressy and work-focused, so Mariama and I decided to take a weekend off and go visiting someplace new.  We’re trying to expand our destinations a bit and avoid the trap of “lets go someplace comfortable and known…” – we hope to travel abroad in the future, and always going back to places you know isn’t gonna mesh too well when we’re travelling in new countries and strange places.

So this weekend we settled on visiting Salem, MA – I’d been here once a long time ago (we’re talking 15+ years, while managing a toddler), but really hadn’t looked around much.  This time we planned on exploring, biking, and walking as much as time allowed.

Because I booked things so late, our options for hotel stays wasn’t that wide, but I ended up booking a room with the Salem Inn, right in the middle of town.  We ended up in one of their ‘satellite’ houses, about a block away, called Curwen House.  Think early 1800’s colonial manor house and you’re not far off.  It was well apportioned, comfortable, and had free breakfasts each day (which was really good).  My only gripe was the air conditioning was stuck on HIGH all weekend, so we were a bit chilled.

Friday night we walked around town a little – we seem to be in mid/off season.  It wasn’t crowded, but it wasn’t dead.  It was cool without being chilly.  Pretty much perfect timing for exploring.

Saturday we got up early, had breakfast, and biked out to Marblehead.  This was our first ‘long’ ride in quite a while – things just have gotten in the way, and we haven’t been on the bikes nearly enough.  We rode about 9 miles total, out to marblehead, then down to the beach (Hello ocean!), and back to town.  We got back good and tired, but rather than fall into bed, we decided to go get a lateish lunch.  A really good restaurant called Bonchon was our destination (think upscale Korean fried chicken), which was delightful.  We were sort of energized after lunch, so decided to do more foot exploring.  Originally we had hoped to visit the Peabody Essex Museum (which had a series of exhibits that sounded great.  Ocean Liners, Movie Monsters, and some other nifty things going on), but the weather was so nice, and there were so many ‘little’ places we wanted to see, we decided to just walk and explore.

Saturday night we were initially going to go a very nice italian restaurant, but ended up at a place called Bambolina (which we found on Yelp).  It was wonderful!  This is absolutely not your neighborhood pizza joint.  We had fantastic appetizers and a hand made pizza (which was made right in front of us) that was outstanding.  Highly recommended!

Salem is an interesting town.  Naturally, it’s best known for the whole witch thing, and it’s hard to get away from it.  It’s the source of 90% of their tourist industry I suspect.  But the town isn’t particularly ‘high brow’ as many Massachusetts coastal towns are.  There’s definitely money to be found (particulary out on the coast near Marblehead and Swampscott), but a good portion of the town is fairly middle class.  It was interesting going from the touristy strip on Essex street and after a block passing homeless folks and loud Irish bars, then jumping right into restored 19th century homes.

Will we come back?  I think so, yes.  As I said, it’s not far away, and with a little juggling, I think we could find lodging that’s comfortable and not very expensive.  Everything is within walking distance, and biking is very easy and gives you access to a lot of the area.