I’ve been on the lookout for a new game to put my new Moto X Pure Android through, a device that’s extremely high powered and seems perfect for games. Ever since I saw the tablet revolution taking over gaming, I’ve been hoping for a decent, realtime, immersive game that I could get behind. (Why WoW and Eve aren’t on tablets yet is beyond me).

My son Zach was a huge booster of MOBA games before they were cool. DOTA2, and later League of Legends were daily activities. I tried them off and on, but found the complexities and knowledge curve too much for casual gaming.

Many companies have claimed to make the MOBA experience enjoyable on a mobile device, but this is the first one that’s gotten me completely hooked. I’m still in casual play mode, but I’m finding it intensely enjoyable. The graphics are magnificent, the characters interesting and varied, and the gameplay is perfect. It’s a dead-on implementation of the MOBA ideals (and yes, it has last hits :).

I’ve put in a couple hours so far, getting a feel for 3 of the heroes. There’s so much more to learn – if you watch the videos on the Vainglory channel on Youtube, watch the detailed rundowns of how to play each hero. The technicalities are vast and deep, and it’s unlikely I’ll ever get to that point with more than 1-2 favorites, but I’m ecstatic that the company behind the game (awesomely named ‘SUPER EVIL MEGACORP‘), spared no expense in making the game easy to get into, but also having huge depth to it.

Anyone want to team?

Yeah, I’ve been pretty focused on drone racing, but this is pretty epic.

My first ‘radio control’ experience was building a Tamiya “subaru brat” model when I was in my 20’s, and that helped later when I started building drones. These cars are a little different, but the feeling is similar. Pretty nifty stuff.

Yesterday Zach and I went to the New England Auto Show at the Boston Convention Center. it was right next door to Arisia, so we thought “what the heck, lets take an hour or two to go look at shiny cars.” He’d never been to a commercial car show before, so we trundled over. 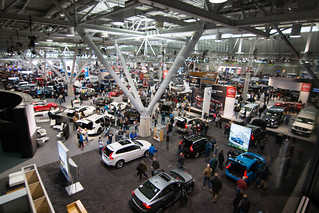 On the way in, we ran the usual gauntlet of free coupons, surveys, and other marketing nitwits. The line to buy tickets was super-fast (literally walked right up to the next person selling), but someone had already stopped me in line “Hey, I bought an extra, want mine?” er…. sure! That was $15 not spent.

Once on the show floor it was acres and acres of carpeting with shiny cars and trucks parked on them. I realized quickly that Zach knew more about modern car lines than I did, so I let him identify some things. I helped out with things like “Yes, that really is a Bentley, and yes, they really do cost a quarter million dollars, and no, I can’t tell you why.”

There were some important wins that made the show worth while. I was able to look at the 2016 Volt, and in particular, whether I could fit in it (spoiler: yup). I also love that Chevy redesigned the Volt’s center console, which was a mess. That plus the new battery layout and longer range (about 53 miles on battery, as opposed to the 41-ish I get with my 2015) makes me want to see about changing my lease over.

Two other high points of the show. Zach has decided that his dream car is the Mazda MX-5 Miata. I’ll admit that when it first came out as the Miata 25 years ago, I was pretty taken with it. No way I could sit in it though. 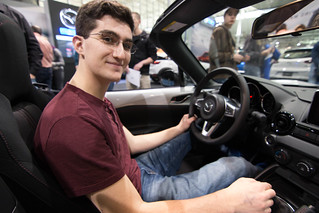 Zach had never had the opportunity to ‘try one on for size’, so now was our chance. He fit! The soft top closed comfortably over him, and he was over the moon. If you’re going to be in love with a car, at least he’s picking a stylish, not stupidly over the moon expensive one.

The one other bit of fun we had was Zach was able to climb into a real live Modified-class track racecar. We were gaping at it when the owner said “Want to try it on for size?” “Not me”, I said, “But could he try?” I pointed to Zach and he said “heck yeah!”. So after some wriggling in through the window, he socketed into the drivers seat (which was conveniently sized about right for him), and he got a feel for what real racecars feel like.

All in all, a nice 2 hours spent with my son geeking about cars. For me, it was also a chance to try out my lovely new Canon 11-16mm ultra wide angle lens. Here’s the full gallery. This was my first time doing any decent work with such a short focal length, and I was pleasantly surprised with the results. I like it!