So, I love all these websites that say “LOGIN NOW WITH TWITTER!” or whatever other little social network icon they can shove into the box. And, sure, that’s great – federated authentication is a good thing. But why, goshdarnit, does it then ask you to create a new username, an email address, and a new profile? I JUST GAVE YOU THAT INFORMATION.

Right now I’m ranting at you, Engadget, for dangling the juicy possibility of a simple “I’m twitter-person me” authentication, and then bait-and-switching it for a new login. Why didn’t you just ask for that to begin with and skip the misdirection?

Today after going to the MIT Flea with Zach I planned on taking a bike ride around Boston. The weather was supposed to be excellent, and I had 6 hours or so to kill until Mariama came into town for her Gymnastics class, so why not bring the bike along, pack up the camera, and just explore?

So explore I did. Ended up being about 8.5 miles of riding, over 5.5 hours. The Gmaps Pedometer map shows my route, starting on Albany street in Cambridge, going all the way to the harbor and back.

I set a very leisurely pace, stopping often to take pictures, admire the area, whatever. The weather was fantastic – I had brought a sweatshirt, but came nowhere near needing it. Stopped in at City Hall Plaza, where there was apparently a big bike event called “Hub On Wheels“. Fellow I ran into said there were thousands of riders in the event, must have been quite a show!

There was a big natural / home grown food festival happening on the greenway – was too crowded so didn’t spend much time there, and some very progressive something or other happening on the Common. There was a loud and well attended poetry reading going on – I didn’t stay to listen.

Have to give thanks to Cambridge Bicycle. They opened at 11am (had to wait 10 minutes or so), and had a take-off seat for me that replaced my old, very worn, and far too narrow old seat. After adjusting my rubbing front fender, I rode the rest of the time just fine.

Lots and lots of pictures coming, but here’s me at Rowed Wharf – just to show I really did make it all the way over there.

I wouldn’t mind doing this with other people sometime. The number of events, festivals, and outdoor activities I ran into was amazing. Anyone interested?

This morning, while getting ready to go to the Worcester Electric Vehicle Ride and Drive Event I put together a little placard to show next to my Chevy Volt to answer some basic questions. What is a Volt, how efficient is it, etc.

It got me thinking. How much is this really helping things? Am I really driving green?

Well, lets take a look at the numbers, purely from a CO2 emissions standpoint. I’ll use my current statistics since I bought the car May 1st. The spreadsheet is to the right.

Now, there’s other factors. Even though I didn’t burn the gasoline myself, that energy had to come from somewhere. I purchase my electricity through National Grid and have signed up for their Green Energy program that makes sure my money goes to pay for green power, so one could argue there’s no emissions for my usage. But lets assume I get my power via normal channels.

According to the EIA, Natural Gas releases 1.21lbs of CO2 per kwh generated. I’ve used 2,389 kwh, totalling 2890lbs of CO2 if I sourced it from natural gas, bringing my total CO2 emissions to about 3790lbs. By that measure, I’ve only saved a few hundred pounds of CO2. We’re putting aside the other nasty stuff that’s generated by internal combustion engines.

But you cannot improve the cleanliness of an internal combustion engine just by checking a box on your power bill. You can do that with electric. With one checkbox (“Use green energy sources”), I cut 4tons of CO2 out of my carbon footprint every year.

Isn’t that worth it?

Tomorrow night I’ll take my Chevy Volt to WPI for National Drive Electric Week’s Worcester Electric Vehicle Ride and Drive Event. It looks like there’ll be about 35 EV’s there, so should be a great mix of technologies and equipment.

My Volt has been a great addition to my daily commute, and it’s even more fun now that there are Level 2 chargers at work. I can go days without burning a single ounce of gasoline.

Anyone who works in the tech industry knows just how quickly a single new piece of technology can change the way we function, and there’s probably no example that better illustrates this than the way the mobile industry has changed how we do just about everything. We’ve gone from only being able to send short messages with our phones to being able to control drones with them, and now, reports are saying that mobile phones have made gadgets like calculators and alarm clocks obsolete.

That’s not all they’re slowly making obsolete, though. The popularity of mobile devices has skyrocketed since the invention of the smartphone, with Gaming Realms, a company that specializes in designed mobile-optimized slots with no-deposit free spins, has reported that there were 1 billion smartphone users in 2012, and this number is expected to double by the end of this year. For years, people have been talking about how e-books might be killing paper, and though all research points towards the opposite, mobile seems to be starting to trump paper in another field: restaurant menus and warehouse checkouts. Businesses in the US and the UK have begun establishing tablet-ordering systems, and results and feedback have been favorable. 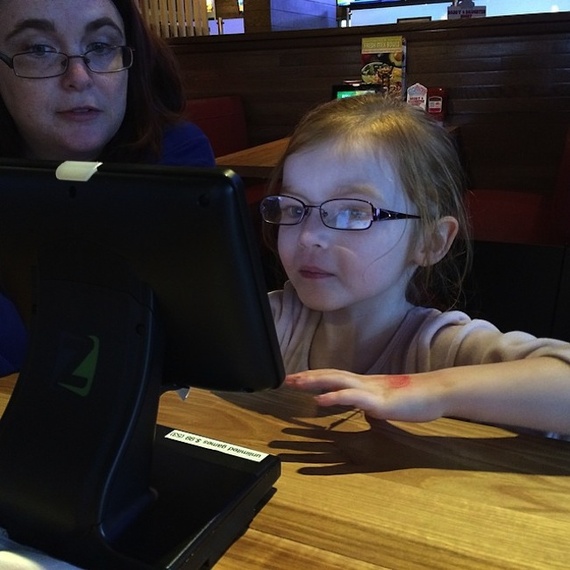 The motivations for using tablet ordering systems are quite universal: they were expected to improve the efficiency and accuracy of order picking while saving in labor and paper costs. When Chili’s implemented tablet ordering with the help of Ziosk, they reduced service wait times, and boosted overall satisfaction with their services because the tablets also allowed children to play games like Z-Trivia, keeping them entertained while they wait for their food to be served. Chili’s is a prime example, because they’ve tried to strike a balance between convenient ordering through tablets and interaction with service personnel, as even though appetizers, drinks and desserts can be ordered through the tablets, main course orders are still taken by a server in person.

Casual restaurants are also starting to look into devising a similar system. According to Adam Rapoport, Editor-in-Chief of Bon Appetit, “I think the casual dining places do it for two reasons: One, it sort of expedites the whole process and gets more people in and out the door quicker. And two, it cuts down on labor costs and it’s more efficient.” It also helps that there are now several different companies that offer tablet-ordering services at competitive rates, but there are still some issues to contend with. For one, tablets, unlike paper menus, have a short lifespan of a few hours before they need to be charged, unless they stay plugged into consoles, which would then limit their portability. This system seems to work for Chili’s, however, as they’ve seen a 20% increase in dessert and appetizer sales since implementing tablet ordering.

The mobile industry has changed the way we do most of our business, and the restaurant industry is no different. With technology rapidly evolving and becoming even more accessible, it’s likely that tablet ordering will soon be in many restaurants across the world.

I’ve been working up the gumption to gain some more flexibility in how I use my cell phone. Having had the same number with AT&T for over a decade, I was loathe to try out other carriers because each time I switched I’d need to port the number, increasing the risk of losing the number.

Google Voice has long tempted me as a possible solution. It allows me to have a single phone number, and have that number forwarded anywhere I like. The big win came when Voice allowed porting of existing phone numbers in.

Today I took the plunge.

I’ve ported my main cell phone number to Voice, gone to AT&T and gotten a new line and monthly plan on my old phone, and told Voice to forward calls to the new number. One big benefit to this is incoming calls will also ring me in Hangouts on my laptop. When a call comes in, I get a Hangouts popup saying Xxx is calling, and I can choose to pick it up on the laptop, using the speaker and mic there, or pick it up on my cell phone, which will also be ringing. I find using the laptop as a phone ‘terminal’ remarkably comfortable and clear, so this is a huge win.

Last but not least, now I am free to play around with phone configurations without risking being ‘cut off’ if my main cell phone number gets screwed up. Today I’m still on my old Galaxy S4, but I hope to get a Moto G or Moto X soon, and set that up as my carry-around device. All of this is going on, and from a callers perspective, nothing has changed. I have one phone number.. just how the call gets to me has been adjusted.