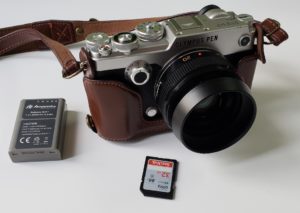 I’ve been using my Olympus PEN-F Micro Four Thirds for about 8 months now, and on the whole, I’ve been super-happy with a number of aspects of it. It’s small, it’s light, the picture quality is excellent, the glass available is very good, and after a relatively busy learning curve, the menus and controls are easy to work with.

That’s not to say it doesn’t have problems. There are several, lets run them down.

I understand this is probably a factor of the small size / mirrorless nature of the beast. But not having any external indicators showing the camera is on, or how many shots are left, or battery level is a real problem. A very small LCD screen (even on the back) would have helped. Having to power up the camera, wait for the EVF to power up, and glancing through it to see if you have a decent battery is a pain. (BTW, there’s a noticeable delay on the battery reader. It can easily say GREEN, FULL, particularly right after putting hte battery in, but 10seconds later it’s showing almost empty. Beware!

This has been noted elsewhere, but the focus time on the unit is quite slow. If you’re working a shot that has multiple depths of field, the camera can ‘hunt’ around trying to set AF. I tend to run my camera in AF/MF mode, which means it’ll autofocus, but then you can use the focus ring to adjust it to where you want. This is a win, but if the camera is ‘hunting’ for an AF spot, you can’t stop it until it gives up and locks onto something. THEN you can use the manual focus ring. I’d like to see the camera automatically try to stop focusing if I touch / move the focus ring.

The controls can be confusing

There’s 8 turnable dials and 5 pushbuttons on a device half the size of a paperback book. Many of these are unlabelled, because they have a ‘variable’ purpose – they can be reprogrammed to do different things, and this doesn’t include the interface controls on the back (another 10 buttons), but at least these are labelled and make sense. I like the big ‘index finger’ wheel on top which is used to twiddle whatever variable setting you’re currently tuned to (For instance, I tend to shoot in A mode, which means exposure is automatically set, but my aperture is set by the finger wheel. This allows me to change DOF on the fly to get the ‘feel’ I want. I can’t imagine if I’m running in full manual mode trying to keep track of what dial does what.

This is relatively minor, but I wish the camera had either better battery life, or an external power connector. The 2000mAh battery will last about half a day of heavy usage, so I carry 3 of them with me. If I want to do any long exposure work or time lapses, I’m pretty much SOL.

Okay, this is the big one, and the reason I decided to write this post. Now, to set the stage, I’m running the latest firmware available (v3.0), so this problem has not been fixed (though it can be with a simple software change). Here it is.

It is TRIVIALLY easy to go out for a shoot and not have a card in the camera, and not notice it.

The camera will operate normally, triggering the shutter, showing all the information in the EVF, but obviously won’t record anything. The ONLY indication there is no card is if you’re looking through the EVF and do not have your finger on the shutter release in ‘half press’ mode. Which, honestly, you never do. If I pick up my camera to take a shot, my finger is already on the shutter setting focus for the shot. I don’t just stare through the EVF unless i’m trying to get a focus point and setting in place.

I’ve caught this problem several times, and it was just annoying. This past weekend, I went out for a long walk in the city, and didn’t realize I had left the card out. I took 20-30 shots and when I got home that night… saw my working card in the laptop.

“But wait, Dave, isn’t there an indicator in the EVF?” – yes, but it’s very easy to miss particularly in bright light, AND only if you’re not touching the shutter release. The left image is a view through the EVF touching no controls, with no card in it. The right image is with my finger on the shutter release, still with no card in the camera. If I trigger the shutter, it’ll act like it took a shot – blanks the EVF, makes a click-kerchunk sound, and goes back to that display if I leave my finger in place (which I do) : 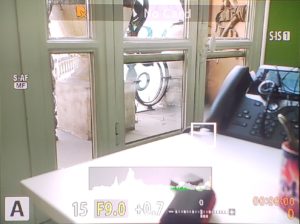 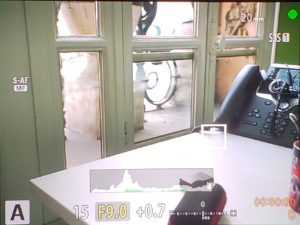 In this case, I was shooting clouds and rainbows… it was that sort of day – fortunately I took some shots with my cell phone, which could do panoramic shots).

So, after 8 months carrying the PEN-F full time, what are my thoughts?  Would I recommend it?

On the average, yes, I would recommend it, but with some caveats, not just the ones mentioned above.  But lets start with some of the positives.

It’s a beautiful camera.  Really, you can’t avoid that.  The styling and setup are wonderful, and adhere to the Olympus PEN styling that goes back 50 years.  I’m proud to carry it and use it.

It’s very comfortable feeling.  The controls, though there’s a lot of them, are easily accessible, comfortable in my hand, and easy to work with.  I added the leather carrying case in the picture, which lets me sling it comfortably under my arm when not using it, and it doesn’t get in the way.

The four-thirds lens platform is quite well supported, and glass is available for reasonable prices.  I have 4 lenses now and being able to get things like a 300mm equivalent zoom lens for $99 makes it a great deal.

No need to recap the technical issues above.  None of them comes close to a deal breaker – at the most they’re irritations.  Olympus has patched firmware on the camera in the past to fix issues, I hope they’ll fix the No Card issue soon.

It’s expensive.  The PEN-F body-only is $999.  That’s not cheap, and in an increasingly saturated compact mirrorless market, while the camera is good, this is on the expensive side.

I would recommend the platform and camera for people who really are into the styling and are looking for a very good compact camera that is professional and competent enough to do serious photography on.  Is it the same as carrying around a full size DSLR like a 7D?  No, I’d say mostly because of it’s speed, battery life, and EVF.  But do you really need that much weight and bulk for most of your photography?  If you want a professional camera you can carry with you full time with exchangeable lenses and excellent features, and the price doesn’t scare you off, the PEN-F is a great camera.

So, I’m sure folks have heard the news about protests in Paris today. That did happen, and in fact I was right in the middle of it for a good part of the day. How could I miss the opportunity to take my camera into a real live protest? 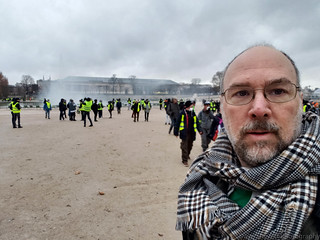 The very short version is, yes, I was at the protests. Yes, there was tear gas and water cannons and lots of people moving around. There were really only a handful of instigators that were egging the crowds on to do damage, but that was enough.

I primarily stayed outside of the major crowds, but I had my camera with me the whole time. Pictures are here: 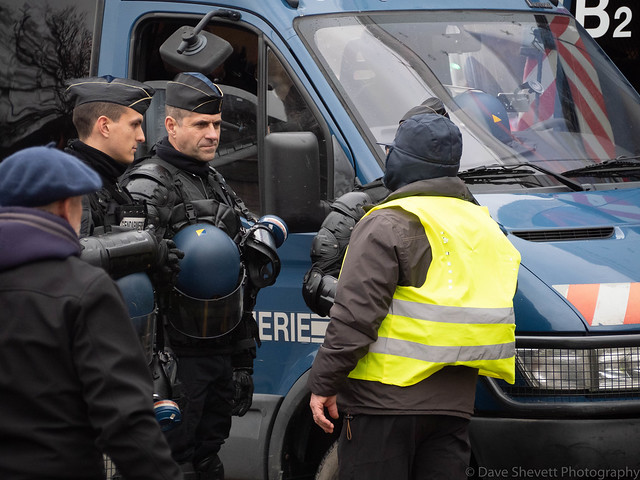 And yeah, now I know what tear gas feels like. I don’t recommend it.