I’ve been in Paris for the last couple weeks, spending time with the engineers I work with. It was a great trip, but I’m also happy to be home in my familiar surrounding… the busy-ness of my home, and the deep deep greens of a beautiful spring.

I spent 2 weeks at a hotel right on the Place de la République, which was an adventure in it’s own right. The Place is about 8.5 acres of open space in the middle of busy part of the city. There is ALWAYS something going on there. Could be demonstrations, could be parties, could be music, could be dancing… for the last weekend, there was a Biodiversity fair where they literally hauled in few acres of sod, grass and plants and make it into a small farm. Complete with cows. 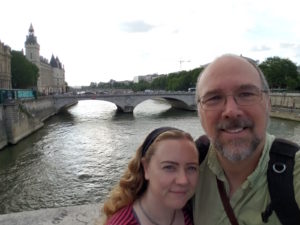 For the last few days, Mariama joined me, and did the sightseeing thing, walking something like 20,000 steps a day for 3 days (OW MY FEET). Gotta admit, the Paris Métro was clean, fast, easy to understand navigate, and EVERYWHERE. You were always a block or three from a station.

I have tons and tons of stories to tell from the trip, too many to ramble about here. But, in my usual style, here’s a bullet list…

I’ll be coming back in the fall… looking forward to it!