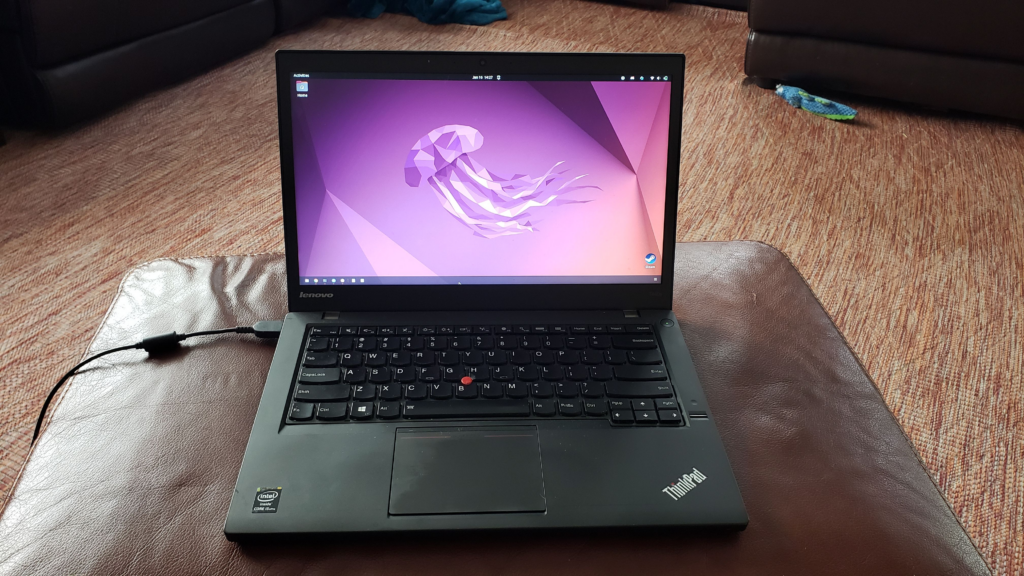 In this day and age, it’s pretty common for folks to consider replacing their phone, laptop, desktop computer every 3-5 years. It’s a terrible model, because it just adds waste and churn, when in many cases, it’s not even necessary.

I’d been hunting around for a Linux laptop to use for a variety of projects. A fellow up at our makerspace sold me a 2013 Lenovo Thinkpad T440s for $80. At it’s root, it was fine. 4gig RAM, a good keyboard and touchpad – it was missing a hard drive, but otherwise the battery was good and was the right size.

I tested out the unit with a USB-booted version of Ubuntu, and that worked just fine. A little sluggish, both because of the USB drive, but also I suspected I was running into memory limitations. 4gig of RAM in a modern OS with a full desktop really isn’t enough.

I decided to invest in upgrading the machine.

As far as hardware goes, that covered the bases.

Installation of the drive and RAM was a piece o cake. The Thinkpad has an internal battery (which is interesting), which needs to be disabled in the BIOS. Once that was done, I was able to just pop the back off, and install the drive and RAM. The entire operation took a whopping 15m.

Powering back on, the machine was like new. Fast, responsive, and Just Plain Worked.

Considering I’ve spent a grand total of like $115 on this, and I’m able to run Slack, Chrome, discord, various other applications, and it’s not even skipping a beat, that’s fantastic. I’m happy.

Now I have to, after many years of not using Linux as a full time desktop, slowly learn the ins and outs of how the Gnome Desktop has changed and how modern stuff work with it. Exciting!