A month or so ago I embarked on setting up my working environment on a laptop running Linux. The iniitial platform was an IBM Thinkpad T20 running Redhat Linux release 9. I was reasonably happy with it, but RH9 is being end of lifed, so perhaps learning all there was to know about that platform wasn’t the best approach.

At a recent event, said T20 Thinkpad was stolen. But, out of adversity comes opportunity. I saw this as a reason to not only upgrade to a more powerful laptop, but also try a differenr Linux distributions. I’m super happy with what I ended up with, and knowing there are others either using this combination of hardware and OS, or are just curious how to go from scratch to full environment, this is a rundown of what my system is like, how I built it, and my thoughts on the state of the art in Linux desktops. 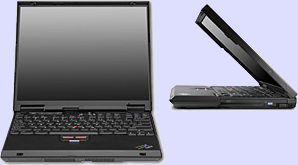 First of all, post-departure, I needed to replace the platform. I was quite happy with the T20, it was small, rugged, had an ‘okay’ engine in it (PIII-700 with 512meg of memory and a 12gig HD). The 2 drawbacks I had using it as my primary development platform were screen real estate and CPU power. I had started to bog the machine down with all the tools I was running, and trying to do regular development on a 1024×768 screen just Wasn’t Going Well.

The laptop arrived, and I immediatley noticed it had a _VERY_ noisy hard drive. Everything -worked-, but the drive whined like a buzzsaw. I’ve heard this happen before, and while it doesn’t mean imminent failure, it does mean the drive is getting old. TIme to replace it. My father-in-law pointed out that IBM equipment has a fantastic warranty that is associated directly with the holder of the equipment, not the purchaser. A quick look at IBM’s website (Type in your serial number) and lo! The laptop was still under warranty! IBM tech support confirmed it, and in 48 hours, I had a brand spankin new 20gig Travelstore drive in my hands, free o charge.

With Redhat end of lifing their desktop offering, I needed to start learning about alternatives. A recent survey showed that Debian Linux was rapidly becoming the most popular Linux platform. My experience with Debian was almost 3 years out of date, and that experience wasn’t all that positive. It was time to try it again.

Debian is divided into distributions, with, as far as I’ve been able to determine, their boundaries in flux constantly. The ‘baseline’ release is / was referred to as “Woody”, (they have a penchant for Toy Story characters). To me it’s confusing understanding all the release names, but for this I’ll use the terminology I got used to. There’s various ‘netboot’ cd images out on the net, download one of those of the Woody distribution, and burn a CD. They’re about 180 meg or so. I found this to be the easiest and least bug-prone way of getting a Debian baseline in place.

Once that’s installed, next step is to upgrade your entire installation to a new distribution. Debian has 3 modes, “stable” “testing” and “unstable”. I personally chose the ‘testing’ distribution. It’s the most stable, and has reasonably up to date applications.

Change the /etc/apt/sources.list to point to a mirror near by, and use the ‘testing’ directories. Here’s mine:

Now comes the magic. You can use the apt-get tool to upgrade the system in place:

These 3 steps will upgrade your system in place from the Woody distribution up to ‘testing’. From this point on, it’s simply installing packages you’ll need to do your work.

For some things I’m doing, I wanted the latest version of the Linux kernel. The version that comes with the Woody distribution is quite old, and really should be replaced. Fortunately, Debian has a methodology for this as well:

This will install a current version of the Linux kernel. The last step before getting down to serious installation and use is to make sure the modules and drivers needed for the Thinkpad are in place. For me, my /etc/modules files contains:

Now that apt is set up properly, it’s time to configure the desktop. The linux desktop is one of the most hotly debated topics in the linux world. For full blown environments, there are basically two to choose from, Gnome and KDE. There are variations,alterations, and other systems all over the place, and granted I’m on up on the very latest versions. However, I’ve been a fan of KDE since the begininng, so I decided to see how things had progressed since I last ran it as my primary desktop, lo these many years ago. I wasn’t disappointed

The version of KDE currently in Debian testing is KDE 3.1.5. This will most likely change quickly, 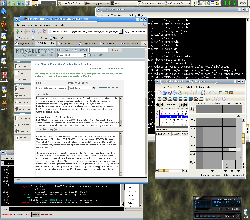 but this is what I’ve installed through the simple application of ‘apt-get install kde’. It took a LOT of downloading, but in the end, it was all up and running.

I’ve also installed ‘gdm’, the Gnome Display Manager, which handles the “Welcome to machine abc, please log in” sort of presentation when you first power up the machine. I’ve worked with this display manager before, and it was familiar territory, so even though KDE has it’s own display manager (KDM), I still opted for the gdm version.

First of all, let me just say ‘wow’. KDE 3.1.5 has come a LONG way since the good old days. The system is even more polished, more intuitive and better put together than I expected. For the most part my needs are simple. I need basic office applications (spreadsheets, etc) – for which I’ve settled on OpenOffice (or, in debian terms, apt-get install openoffice :). KDE does come with it’s own office suite KOffice, but I’ve found that OpenOffice has a more complete offering, so I’m sticking with it until I have a real reason to switch.

I’ve done a lot of customization in my environment. I’m trying the ‘toolbar on the top’ 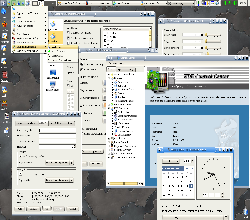 configuration, reconfigured down to small. I consider the toolbar an information element, rather than a launch point, so I like packing in monitors for battery status, sound, time, other apps running, virtual desktop status, etc etc. KDE has an extensive menu structure that came up preconfigured quite nicely, And no one can dispute the power of Konqueror the KDE browser. To call Konqueror ‘just a browser’ does it a gross injustice. Due to an advanced design involving easy to implement plugins, Konqueror is one of the most powerful file and resource browsers around, bar none. It’s fast, flexible, and just a joy to work with. Konqueror is so well respected, it was chosen by Apple as the platform for their browser in OSX, Safari.

I’ll probably do a more in depth review of KDE at some point, suffice to say, I’m pleasantly impressed. KDE has gotten the short end of the stick in the Linux community, due to issues with licensing and other myths.

I’ve been running this platform pretty steadily for a week now, and I’ve been quite happy with the results. I’ve hit a few snags, such as:

This article just scratches the surface of what can be accomplished with opensource platforms and systems. Stay tuned to Planet Geek for more reviews of tools and configurations under Linux.