When I was working at in the IT Department at Wildfire Communications, the number one toy the execs and managers wanted was  the Toshiba Libretto ‘palmtop’ computer. They ran Windows 95, were compact and functional (for the time), and made great conversation / showoff pieces. I had to have one for my collection. 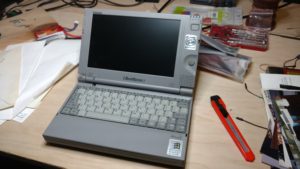 I’ve let people know I was collecting vintage handheld computers, suddenly everyone wanted to donate! I quickly put together the collection home page and made the wishlist known. Lo, a friend I know from Arisia said “I have a Libretto that’s just lying around. Want it?” – Heck yeah!

This weekend, it arrived via a somewhat circuitous route, and lo, it is a 110CT – a slightly later model than the ones I worked on (which were 50CT and 70CT’s), but still the same form factor and awesome design. One of the niftiest is the integrated touch-mouse on the right side of the screen.  The mouse buttons are actually on the lid, so you move the mouse with your thumb, and grip the buttons on the reverse side.

This one appears to have a screen problem that won’t let it show video properly, but I’m excited to have it in the collection. Thanks Ben!

For the curious, here’s the specs on the 110CT:

I finally googled around long enough to find the problem.  The Libretto shows an absolutely blank screen until any boot device is ready.  I noted that if I held down F12 on startup, I’d get the BIOS update screen, so the screen worked, the problem was elsewhere.  While on the BIOS screen, I heard a very light noise – and realized it was the HD trying to spin up, but failing.  This is not an uncommon problem in older computers.  The drives get ‘stuck’ and can’t spin up after sitting for a while.  Sometimes referred to ‘stiction’.

There’s only one cure for stiction.  A vigorous shake of the computer, or… yes, I really did this, rap the laptop on the table a few times.  For a book-sized computer, this was easy.  A few taps, and I heard the hard drive happily spin up, and lo! A windows 98 screen appeared!  We’re in business!