Winter means getting back into working on the Jeep (wait, does it? Oh heck, dunno. Vacation is a good time to do stuff). When I bought my Jeep TJ last year, it came with a rear seat, but the brackets needed to use the seat had been removed, so it’s just sat in the garage. A lot of Jeep purists remove it because it’s just extraneous, and takes up valuable storage space, but I’ve missed being able to take more than one passenger out for rides (either around town or on the trail), so I finally got around to getting this task done.

I bought new brackets and screws a few months ago, so I should have all the things neeed. What had been holding me up was the previous owner had painted the ‘tub’ of the jeep with Monstaliner, a very thick protective paint that protects the body of the jeep from rust. This paint was over everything, including the screws and bolt holes where I needed to mount the brackets. That paint would have to be scraped away before I could install anything. 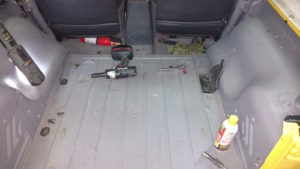 I had help from a friend with some extra tools, and we were able to use a blow torch to heat up the monstaliner that was covering the side bracket screws, and, using a small pick, get the material out of the torx (torque?) heads enough to get a good solid mating of the socket. Those screws came out fine, but there was also material in the holes in the floor of the tub where the paint had dripped in.

We tried using the torch and screws on the floor holes to see if we could get the material out of the way, but it didn’t work (the screws would just jam up). In the end we used a tapping set to re-groove the holes and we were able to seat the screws into the floor of the tub 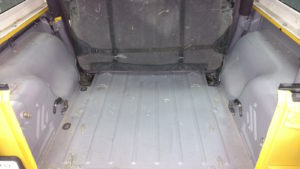 After that it was just a matter of putting the brackets in and dropping the seat in place. It fit like it was supposed to, but I realized I was missing a part. There’s a C-clip or something similar that goes on the front bar that keeps the seat from sliding sideways when folded up. That clip was missing, so I’ll need to go find that before I can declare this useable.

The next step will be to get a seat belt set (hellooooo ebay) and install those. When that’s all done, I’ll finally be able to take the family out for drives and wheeling if they want to come along! It’ll be nice being more than a 2 seater.