The photography community is going through yet another sea change driven by technology. The first big adjustment happened when digital cameras got good enough to replace film. This was primarily driven by DSLR’s becoming price and performance competitive with analog cameras, and the entire industry pivoted to digital. 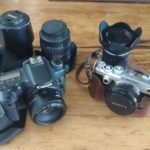 The next wave is the move from DSLR to mirrorless technology. This is fairly recent – technically the earliest digital cameras were ‘mirrorless’ in that they didn’t have the internal mechanisms that SLR’s have (and thus were considered inferior in many ways). But recently mirrorless cameras with sensor and lens ecosystems as good as professional (and ‘prosumer’) cameras have been gaining popularity, and it’s become pretty apparent that the DSLR’s days are numbered.

I went whole hog into DSLR land after taking pictures for many years with ‘point and shoot’ digital cameras. My first DSLR was a Canon Digital Rebel XTi (nee ‘400D’), and later a Canon 70D. I continued using both through weddings, portrait shoots, event photography, etc, enjoying the quality and ‘feel’ of the platform. 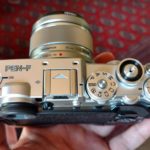 Eventually I realized I was using my camera less because of it’s bulkiness, and the fact that I was already carrying a pretty decent camera in my pocket. My cell phone camera was, to use the well worn phrase, the best camera you can have (ie, “the one you have with you”). I was using my phone camera for snapshots, shooting subjects I was interested in in the moment, etc, but my pictures stopped being ‘art’, and started just being ‘documenting’. I’m not interested in just being another snapshot phone cam photographer. I want to make beautiful images, and while some of that is possible with a cell phone, I wanted better. It was clear I wasn’t using my Canon (though I carry it in my camera-enabling backpack a lot) because it was heavy, bulky, and unwieldy. Hauling out 2 pounds of camera to take a picture of the beautiful sky or a street at night was just becoming a hassle.

Time to look at mirrorless cameras.

Canon had already been working on a mirrorless line, with the M50 and the M6 bodies. They were relatively expensive, and the reviews were okay, if not exciting. If I was going to invest in an entire new camera platform (and lets be clear, when you replace your camera, you’re also replacing all the accessories – lenses, flashes, etc – you’ve gotten for the old platform), I wanted it to be something I was excited about, and had a good ecosystem behind it. 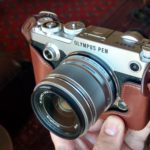 I was attracted to the Micro Four Thirds family of lenses (referred to as ‘m43’ or ‘m4/3’ or ‘MFT’ by the technorati – I just use m43). There seemed to be a lot of support for the platform among many manufacturers, so I started focusing on what platforms were around. My attention was drawn to the Olympus PEN series of cameras – these cameras go back to the late 1950’s, and are easily recognizable in their styling and form factor. Olympus has made digital versions of the PEN cameras for a few years, but only recently have they gone all out and made a high end digital mirrorless version that supports the M43 lens platform, all in the same form factor.

And it looks cool as hell.

After reading many reviews and details online, I took the plunge, and ordered the camera. Because I knew I’d be banging it around a lot, I also added a very nice retro looking leather case for it, as well as a few extra lenses with associated filters, including a 25mm F/1.8 (what is equivalent to the standard 50mm fixed lens on most DSLRs), since much of my style works with shallow depth of field shots.

I received the camera just before a trip to California, so I basically bundled everything into a bag and got on the plane. My first real experience using the camera was during some walkarounds in San Francisco.

It’s small. In some ways, the camera feels a bit like a toy, but only because I’m so used to handling a large bulky device. Once I got past the size issues, the camera is pleasant to use. Fast on the shutter, good autofocus and it makes nice decisions about auto settings. I’m avoiding fiddling the manual modes for a while, because the manual is ENORMOUS, and there’s a lot to get through. I did change the autofocus setting to be a sort of hybrid manual mode. You can set it to autofocus for you, then you can manually adjust the focus off the initial setting via the lens ring. Handy.

I immediately ran into a problem where the camera would lock up after several shots. No amount of on/off, button pushing, closing / opening the display or anything would cause it to come back to life – and it would get HOT, draining the battery very quickly. It was obviously stuck in some software loop. Popping the battery out and back in cause it to reboot, and I could continue shooting, but having to do this every 3-4 shots was frustrating. Turns out it was a known firmware bug that was fixed in version 2.0. Olympus provides a (remarkably well written) download / update tool to upgrade the camera via a USB cable. Once the firmware was updated, no more lockups. Hooray!

The next thing I had to overcome was the viewfinder. Because this camera is not an SLR, which shows you, via the viewfinder, exactly what the camera sensor will see when it takes the picture, The PEN-F has a secondary digital display within the viewfinder that shows you what the sensor will see, but obviously at a much lower resolution. It has the advantage of showing you all the details you’ll need to know about the shot (ISO, aperture, exposure, battery life, storage information, etc), and has a neat presentation style after you take the shot (you half press the shutter button to set focus, then full press to shoot, just like most cameras… On the next press, you get a very fast preview of the last shot taken – about 1/4 second, but it lets you know what the last shot looked like. I found this extremely useful when taking multiple shots in a row, to understand if the last shot was focused right, got what i needed, etc). The digital viewfinder has drawbacks though. It doesn’t come on until the camera senses your face is near the display, so there’s a noticeable delay before the image comes on. This can be disconcerting. The display is a low resolution version of the actual photo you’ll be taking, and because it’s a luminous version of the shot, the colors and values can feel ‘off’ – this isn’t a reflective version of what your lens would see, it’s a replayed version of reality using glowing pixels. It has a very different feel, and takes some getting used to.

The back of the camera has a flip out high resolution touch sensitive display that is great for replays, working through the (VAST) menu system, or doing maintenance on the camera. The display can be folded out, flipped over, and hidden, which is how I prefer to shoot – I don’t like having a sensitive glass display open to being banged about in my bag. The menus and environment were snappy and easy to navigate, but the menu system is quite deep and detailed. I’ve had to refer to the manual and to online forums several times to find things buried in the multilevel menu system.

The PEN-F does have wifi support, and it looks to be much better than the Canon configurations (which I found all but useless). For now I’m using SD cards to move content from the camera to my Mac running Lightroom. I’ll try the wifi process at some point, but or now it’s something that’s not on my hot list.

So, how does it perform?

So far, I’m exceptionally pleased with the quality of shots coming off it. First, working with the fixed 25mm lens has been an experience pretty much dead on with my work with the standard ‘nifty fifty’s. The lens is fast and responsive, and handles light just fine. The focal depth is about what I’d expect for a fixed lens of this size, and the form factor is just right. In my bag, the entire assembly is hardly noticeable compared to my bulky 70D.

Olympus also offers a 150mm (300mm equivelent) ‘long lens’ for an extremely reasonable price (I got mine for $99). I recognized I wanted to do long lens shots, so picked up the 150mm, and let me tell you, I was not disappointed. Motion on the lens is excellent, and I was able to ‘snipe’ profile shots at a big social gathering beautifully. I also took this lens to a soccer practice, and was very pleased with the quality of shots coming out of the system.

So, lets talk physical comparisons for a bit.

The obvious part is – the Olympus is small. Roughly half the size of the Canon equipment. This makes it much easier to carry around and not have it be a burden. Batteries, camera body, lenses, associated gear, all half the weight, for roughly the same performance.

Weight wise, I compared the Canon 70D with a 1.8mm 50mm lens against the Olympus PEN-F with a 25mm 1.8 lens. The Canon weighed in at 925 grams, and the Olympus was 650 grams, putting the Canon setup about 50% heavier than the Olympus. That’s a pretty significant change.

In short, the Olympus is smaller, lighter, and easier to work with than the Canon, with comparable performance.

What about picture quality?

I’m not the worlds greatest photographer. In fact, I’d argue I’m somewhere in the ‘meh’ to ‘okay’ department. Sometimes I luck out, and sometimes something I’m really trying to capture happens as I envisioned it. I love the work I create, and want to get better, but I know I have a lot to learn. Having said that, I don’t think i’ve come anywhere close to pushing the 70D or the PEN-F to their capability limits, so while some may argue the PEN-F has this or that deficiency or advantage over the 70D, that’s not really what is going to impact my work. I got the camera because I felt I needed something more portable, lighter, and easier to work with, which would encourage me to get out and shoot more. I believe in that I’ve succeeded.

Wrapping it up – Conclusions and thoughts

After a month with the new camera, I have to say I’m pretty satisfied. The form factor, the picture quality, and the performance has been great. I won’t lie, part of my attraction to the camera was how it looks and feels. It’s got a retro affect that I find attractive and interesting. Very little of the styling is ‘there just for show’ – it’s all functional and useful (okay, maybe the on-camera post-effects set via a dial on the front of the body are a little strange), but overall, the controls are effective, well placed, and functinal.

I’m fully committed to using the PEN-F as my primary shooter. There’s no reason I’d need to bring my 70D with me for 98% of my photowalks or other events. Am I getting rid of my 70D? Probably not – having a second body is very handy for events and paid gigs. I’ll probably work with both cameras for weddings where having two cameras set up with different lenses is needed.